Dr Byron Louw matriculated from Glenwood in 2005, where he was also a boarder at Gibson House. For the next 6 years, Byron worked as an English and History teacher at Glenwood through its Teacher-In-Training programme. During this time, he earned his Bachelor of Social Science (BSocSci) and Master of Development Studies (MDEV) from UKZN, and also completed his Post-Graduate Certificate in Education (PGCE) from UNISA during the same period.

In 2012, Byron worked at a corporate consulting firm and then worked pro bono as a Community Development Consultant in a small village in Guangzhou, China. Starting in 2013, Byron taught as an English Teacher to the Saudi Royal family at a private international school in Riyadh, Saudi Arabia, and then worked for the Abu Dhabi government’s Ministry of Education and its public school reform project for the next three years. During this time, Byron met his American wife, Jenn, while they were on a Christian mission trip through Greece, Bulgaria, and Turkey. After getting engaged in Ireland and married in Florida, USA, Byron, and Jenn lived in Abu Dhabi together before choosing to start their little family in Harrisburg, Pennsylvania near Jenn’s family. Byron is now a U.S. citizen and has two sons, Vaughn Isaac Louw and Henry James Louw.

Once in the USA, Byron moved into the Higher Education environment through his employment with the Pennsylvania State University, where he has worked for four years. Having started out as an international student coordinator, Byron transitioned into medical education at Penn State’s College of Medicine where he now works as the Education Strategy and Planning Manager in the Department of Medicine. In his executive position in the Department, Byron supervises 143 employees and manages budgets totalling approximately $8.5 million. Having earned his Doctorate in Education in 2020 from the Pennsylvania State University, Byron serves as an educational expert who conducts medical education-related research and works with the Department’s physician leadership to ensure that its 200 physician faculty are providing the best possible learning experience for its 150 medical students, 91 internal medicine residents, and 65 medicine specialty fellows.

Byron says: “No matter the environment I have found myself in over the last 15 years, the world-class education I received at Glenwood has set me up for maximum success. The vibrant and diverse learning environment at Glenwood gave me a broad perspective of the world that equipped me to be both flexible and innovative in unfamiliar places and situations. My Glenwood experience was an invaluable investment in some of my most formative years – an experience that not everyone has the benefit of having.” 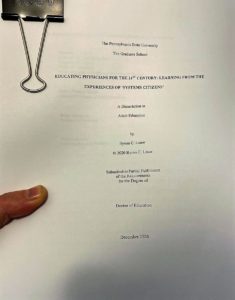