Glenwood High School held its annual Delville Wood Memorial Service and Wreath Laying Ceremony on Thursday 21 July 2022 at 11:00 in the Mvinjelwa Johannes Mhlongo School Hall.
Guests from NMR, the Moths, the SANDF Society, and other private institutions joined the memorial service.
Delville Wood (in French, Bois Delville) is a small forest adjacent to the village of Longeuval in the Somme department of northern France. Delville Wood possessed a wedge of high ground with which the formidable German defences could be prized open. The wood was duly stormed and held for several days by the SA Infantry brigade and so this battle became synonymous with South African involvement in World War 1.
The South Africans were relieved on the night of July 19, having lost 766 dead among the four battalions alone; the dead outnumbered the wounded by four to one. Throughout poor weather (it rained often) and enemy artillery fire which reached a crescendo of 400 shells a minute, the surrounding landscape was transformed into amess of broken, stumpy tree roots and massive shell holes. Mud and rainwater covered bodies of South African and German forces alike – many bodies remain in the wood today (which is now in private hands). The Germans lost 9,500 men by August alone.
Glenwood Old Boys paid the highest price during this battle.
Arthur Basil MacCabe of “D” coy, 4th Regiment of the SA Infantry died on Saturday, 15 July 1916 at the age of 19.
George Edward Thorpe was part of the 2nd Regiment of the SA Infantry and was reported missing, presumed dead on 18 July 1916.
When the South Africans withdrew from the wood on 20 July they had no option but to leave their dead behind, unburied. It was not until 25 August 1916, that Delville Wood was finally cleared of all enemy resistance, and burial parties could start identifying and burying the dead. 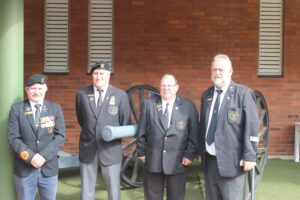